Over the past 30 years, Zaire ebolavirus (ZEBOV) recombinant, a highly pathogenic virus for humans and wild apes, has repeatedly emerged in Central Africa. To date, only a few virus isolates have been genetically characterized, all belonging to a single genetic lineage and originating exclusively from infected human patients. Here, we describe the first ZEBOV sequences isolated from great ape cadavers in the Gabon/Congo region that belong to a previously unrecognized genetic lineage.

According to our estimates, this lineage, which we also found in the two most recent human outbreaks in the Republic of the Congo in 2003 and 2005, diverged from previously known viruses around the time of the first documented human outbreak in 1976. These results suggest that the spread of the virus from the reservoir has occurred more than once, as predicted by the multiple occurrence hypothesis. However, the young age of both ZEBOV lineages and the spatial and temporal sequence of outbreaks remain at odds with the idea that the virus simply arose from a long-established, widespread reservoir population.

Based on data from two ZEBOV genes, we also demonstrate, within the family Filoviridae, recombination between the two lineages. According to our estimates, this event took place between 1996 and 2001 and gave rise to a group of recombinant viruses that were responsible for a series of outbreaks in 2001-2003. The potential for recombination adds an additional level of complexity to potentially unravelling and controlling the emergence of ZEBOVs in humans and wildlife species. 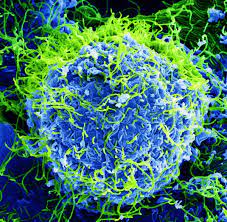 We ourselves and/or local villagers found animal carcasses in the forested areas of northeastern Gabon and northwestern RC (Gabon/RC) during the human Ebola outbreaks that occurred between 2001 and 2005. Dead animals were rarely seen in the forest due to their rapid decomposition and the small number of non-predatory deaths. During the 5-year study period, we found and analyzed 47 animal carcasses in the region of the human outbreak in Gabon/RC. 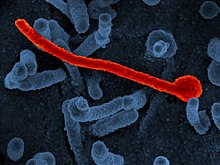 The two most recent ZEBOV outbreaks occurred in RC (20). One originated in Mbandza and was associated with 35 human cases (29 deaths) between October and December 2003, and the other originated in Etoumbi, where 12 human cases (9 deaths) were reported between April and June 2005 (Fig. 3). Blood samples from acutely ill patients from Mbandza (n = 10) and Etoumbi (n = 1) were collected in EDTA with oral informed consent from the patients, following the World Health Organization guidelines on hemorrhagic fever agents. viruses in Africa.

Animal carcass samples were fragmented and homogenized in the lysis buffer supplied with the RNeasy kit (Qiagen). Total RNA was extracted from the final supernatant with the RNeasy kit. For human samples, total RNA was extracted from plasma using the QIAamp Viral RNA Kit (Qiagen). First-strand cDNA was synthesized and then subjected to amplification with the primers and conditions described below. The amplicons were sequenced by GeneCust (Evry, France).