Recombination of Drosophila melanogaster is a fundamental biological process with profound evolutionary implications. Theory predicts that recombination increases the efficiency of selection in natural populations. However, direct tests of this prediction have been restricted to qualitative trends due to the lack of detailed characterization of recombination rate variation between genomes and within species. The use of imprecise recombination rates can also bias population genetic analyzes designed to assess the presence and mode of selection across genomes. Here we report the first high-resolution integrated description of genomic and population variation in recombination, which also distinguishes between the two outcomes of meiotic recombination: crossing over (CO) and gene conversion (GC).

We characterized the products of 5,860 female meioses in Drosophila melanogaster by genotyping a total of 139 million informative SNPs and mapping 106,964 recombination events at down to 2-kilobase resolution. This approach allowed us to generate genome-wide CO and GC maps, as well as a detailed description of the variation in recombination between individuals of this species. We describe many levels of variation in recombination rates. On a large scale (100 kb), CO rates exhibit extreme and highly punctuated variation along chromosomes, with hot and cold spots. We also show a wide intraspecific variation in CO landscapes that is associated with low-frequency hotspots in our sample. 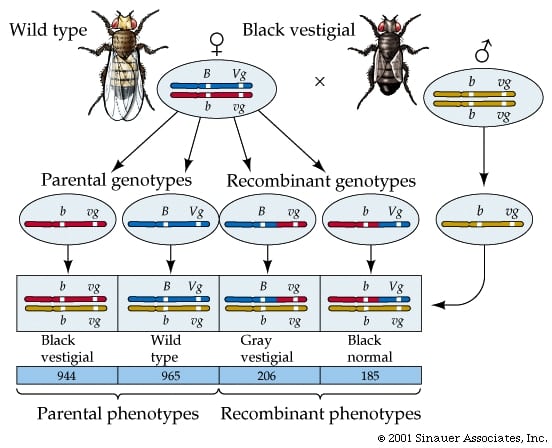 GC rates are more evenly distributed across the genome than CO rates and are detectable in regions with reduced or absent CO. On a local scale, recombination events are associated with numerous sequence motifs and tend to occur within transcriptional regions, suggesting that chromatin accessibility favours double-strand breaks. All these non-independent layers of variation in recombination between genomes and between individuals must be taken into account to obtain relevant estimates of recombination rates and must be included in a new generation of population genetic models of the interaction between selection and linkage.

Recombination rates are often estimated based on the relationship between the physical and genetic maps of the Drosophila genome. Early estimates of recombination, such as the adjusted exchange coefficient (Kindahl 1994) were based on cytological markers in combination with estimates of DNA content from the optical densities of polytene chromosomes (Sorsa 1988). Other techniques such as RTE (Hey and Kliman 2002) use transposable elements as markers on the physical map (Ising and Block 1984). However, with the availability of the complete genome sequence, the physical map of the genome is much more precise, facilitating a more precise estimate of recombination rates in D. melanogaster (Hey and Kliman 2002; Marais et al. 2001). ).

Recombination rates are now estimated by plotting Marey maps of the genetic positions of molecular markers (in centimorgans, cM) versus their physical position (in megabase pairs, Mbp). The recombination rate at any given nucleotide coordinate is estimated by taking the slope of the curve relating the genetic map to the physical map in one of two ways. A sliding window approach could be employed, in which a linear function is used to fit genetic position as a function of physical position within a window of a given size along a chromosome arm. 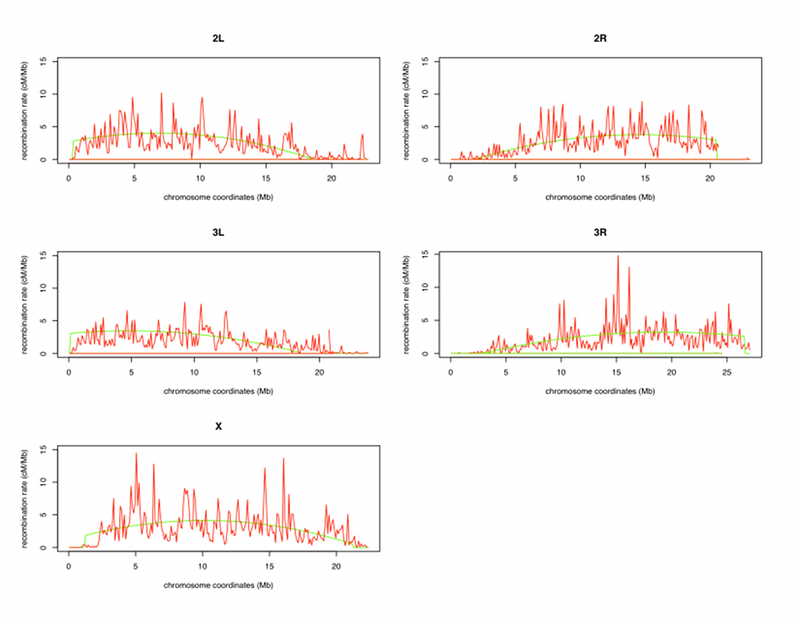